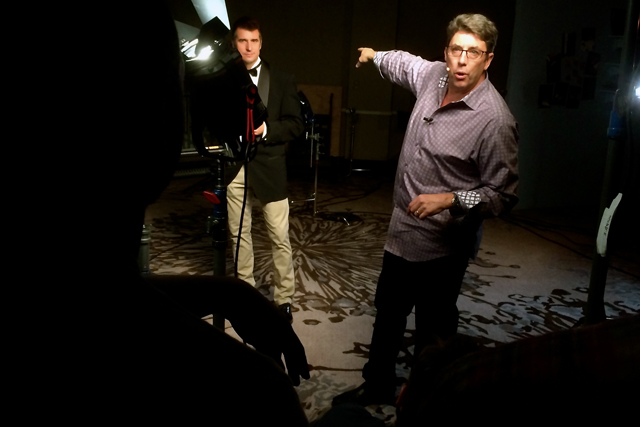 When the Shane Hurlbut Experience was launched I was really kind of shocked.  I could not wrap my head around the idea that a Hollywood DP at the top of their game was offering a master class and bringing it to a city near me.

This was mind boggling to me.  Shane has always been generous with his knowledge on his blog, but I feel like the Shane Hurlbut Experience takes that generosity “6,000 feet higher” a phrase that Shane might say on set when requesting the camera or a light be raised a good distance.  I was so excited that I signed up for both The Illumination Workshop & Masterclass, then went back to read more about them.

On the first day I got up bright and early, but it was still dark. I brewed some coffee had some of my daughter’s cocoa pebbles (because cocoa pebbles are awesome) wrote a note for my wife and each of my two kids to let them know I love them and would see them in two days.  I took my coffee to go as I had a decent little drive ahead of me…  I was full of hope and positive thoughts about how amazing this experience was going to be… I drove out of my neighborhood and made it out to the freeway when John Lenon’s “Imagine” came on my radio.  Outside was “magic hour” and the cool air breezed in from my open sunroof mixing with my SUVs heat fan.  I could see an amazing warm orange sun rise in my rear view mirror and all felt right with the world.  It was like everything was aligning to make this a perfect experience.  Looking back now, that song was absolutely perfect for my “experience”.  Shane Hurlbut is a “dreamer” and in a sense “sharing all the world” to his students in the class, as it pertains to cinematography.

I arrived at the hotel and found myself entering a back door that put me almost directly into the room and onto the sets.  When you consider that the sets were traveling, they were awesome!

I was given a crew seat.  Crew seats are available to the first x number of people that sign up for a given city.  If you can get one of these seats, you want it!  It’s nice to sit up front.  Being in a crew seat also gets a cool Illumination Experience T-Shirt.  So, it pays to sign up early.

Shane is introduced and before we know it, he is wearing a pirate hat and sailing around what he affectionately calls “the pirate ship”.   This “light study rig” is in essence an ingenious contraption that rotates a concoction of soft, medium, and hard light on a dolly around a center subject.  I believe this rig is currently the fastest  and easiest way “on the planet” to demo and shift the position of the key and back light to show how varying locations and sources affect the quality, mood and tone of your shot.  It’s pretty cool.  I’ve watched instructional videos that walk the lights around “the clock” and this rig not only speeds things up, but also makes it fun.  Shane invites small groups of students up to show key lighting positions that they feel make the actress look flattering, interesting, or damaged.  It feels like a short study and we are off and running.  Shane has us on the set to show us how he lit a scene from the movie Crazy Beautiful.  We are introduced to the master shot and dive into dirty singles.

This class had a range of really talented skilled people to beginners and I felt like everyone was totally locked in and absorbing the knowledge that Shane was offering up.  Shane is really an exceptional teacher.  He is patient, funny, incredibly open to questions, and very generous with his knowledge.  A few people may get fired on set, but don’t worry, Shane tells us that he has tried to fire one of his regular crew members 44 times, but the guy keeps coming back.  Shane definitely sprinkles in the humor and it helps to maintain the energy.

Day 1 began with some basics, but it was so hands on and immersive that a long day, passed by in the blink of an eye. I drove home that night pumped for day 2.

Day 2 came, and all that set up education that Shane gave us immediately paid off as DPs where picked and jumped in to the captains seat with Shane over their shoulder, mentoring or crawling on the floor to run a cable for electric, flying in a flag for grip, or dropping in filters for camera crew.  It kind of reminded me of those old carnival games where the goffer keeps popping up all over the place. It was great seeing Shane work.  I feel this kind of experience, at least for most of us, is a once in a lifetime opportunity to work beside a Hollywood DP.  This stop of the tour was in Washington, D.C and we had people as far spread as Paris, France to Hawaii.  Enough said!

On day 2 we were separated into teams that rotated from electric, grip, and camera.  As the day passed, people really began to bond and form relationships and I hope to keep in contact and potentially collaborate with some of these people.   I spoke with one guy in the class and next week he was beginning photography on his 2nd feature film.  I am amped for this guy and the facet that he was able to take Shane’s class right before shooting this feature film.  I can’t imagine how quickly this class is going to start paying for itself on the film.  I know he’s going to rock on the film and hope to see some of his work.  Kick ass, Rob!!!

I felt incredibly lucky to be picked to DP the last shot of the day.  I had the benefit of all the knowledge from day 1 and day 2 and all the built up unity of the crew and was able to call on what I had learned for my set up.  First, I asked Shane to have all the set lights that were on turned off, but leave on the practical desk light on the table near the actress.  I just wanted to see that practical in the darkness all alone. I told Shane I loved the way the practical was key lighting the actresses.  I chose the angle, color temperature, and prime lens I wanted to use for the shot.  I blocked the movement with help from my camera team and the actors.  The crew I worked with during the day was awesome and they did a great job on camera for this shot.  I appreciate it fellas!  Kent rocked it on camera! Thanks brotha!  All the scenes on day 2 were shot with the Canon EOS C500.  It was cool to use a camera in the EOS line as we have the Canon EOS C100 with Ninja Blade and a Canon EOS 1D C.  Shane was an amazing mentor allowing myself and all the selected DPs to make decisions and choices, while giving us recommendations and input as needed.   The DP experience was electrifying for me. I felt at home in this element and it was just awesome to have a world class DP backing me up.  Thank you Shane!

If you are still reading this post and have not gone to sign up, my recommendation is to just do it and make the most of it.  It’s a pretty special opportunity and worth every penny!

We tell stories, whether big or small or any place in between.

Thank you for reading our Blog!